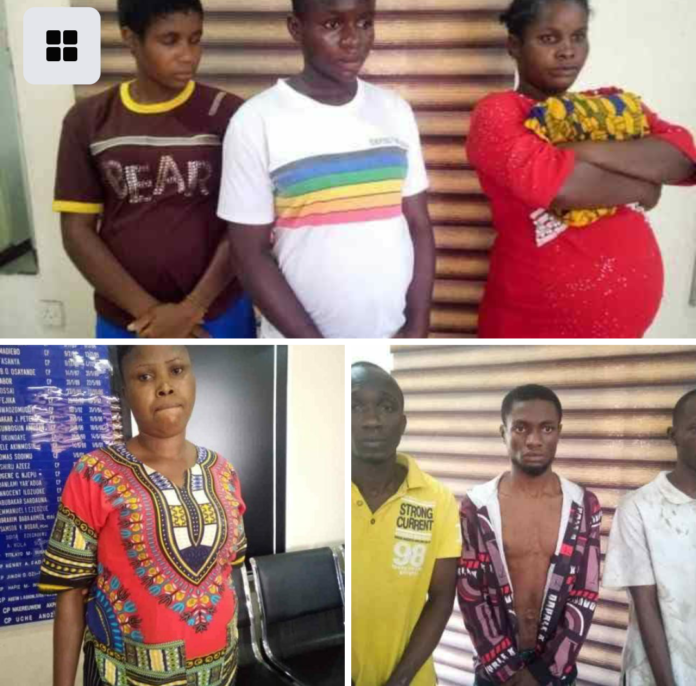 The Cross River State Police Command in the early hours of Wednesday bursted a baby factory in Obot Udonna Village in Akampka LGA of the state while parading a three-man robbery gang that specializes in raping their victims and demanding oral s*x.

It was learned that the covert operation which led to the rescue of three pregnant women and three children was carried based on Credible intelligence.
Speaking with newsmen, the Commissioner of Police, Abdulkadir Jimoh said they got credible intelligence which they promptly acted upon and apprehended the operator of the Baby factory, Imaobong Asuquo.

He also revealed that the prime suspect operated the baby factory in her home and sells baby for 500,000 each in collaboration with another suspect simply identified as Iquo.

His words: ”We got credible intelligence and we swung into action immediately in a covert Operation at about 4:00 a.m Wednesday and we burst a baby factory operated in the residence of one Imaobong Asuquo who sells babies for at least 500,000 naira .
“We also rescued three pregnant girls including two 19 year old and another 21-year-old as well as two children (names withheld)aged 2 and 7 years.
“From the statement, we got from one Solomon Christopher husband to one of the rescued pregnant women, we also discovered that three babies were sold for 500,000 naira each already.
“But we are working assiduously to make sure we get to the root of the matter and all involved apprehended and charged to Court to face justice, investigation is still ongoing as we speak,” Jimoh said.

Speaking with the Prime suspect, Glory Asuquo told Vanguard that she learnt the trade while with her madam in Enugu many years ago. She said:”
‘I learned the illicit trade under my madam while I was serving her in Enugu many years ago, when I came back to Calabar I decided to start my own business, it was going smoothly until my contact (Mrs Iquo) person died, she was among the 11 persons that died at Awi few weeks ago.
“I usually discuss with them (the pregnant women) before I send them to the receiver (Mrs Iquo) who then pays me, I have sold three children so far for 1.5 million, two boys and a girl and I gave thier mother 350 thousand each and keep 150 for myself from each deal
“I don’t think I will be able to continue the business because Iquo who brings buyers is already dead. I am 32 years old and a mother of two and my daughter is also pregnant and amongst those rescued, it was my joblessness that led me into the business,” she said.

In another development, a three-man robbery gang that specializes in robbing and raping women have also been arrested. Vanguard gathered that two out of the three members just returned from Afokang Correctional facility in August and still went back to robbery barely two months after they regained freedom. One of the suspects, Chidi Okereke disclosed that he doesn’t know what comes over him when he is on operation adding that the sexual urge usually becomes strong and he demands oral sx. ”
To be frank with you, I usually demand oral s*x when I am on operation, the urge to be sexually stimulated or sucked at that point is always there, I can’t even explain why and how. ”
I just came back from prison in August and a friend of mine invited me to join their gang since I have nothing doing I had to join them, this is our third operation since I joined the new group,” he said.