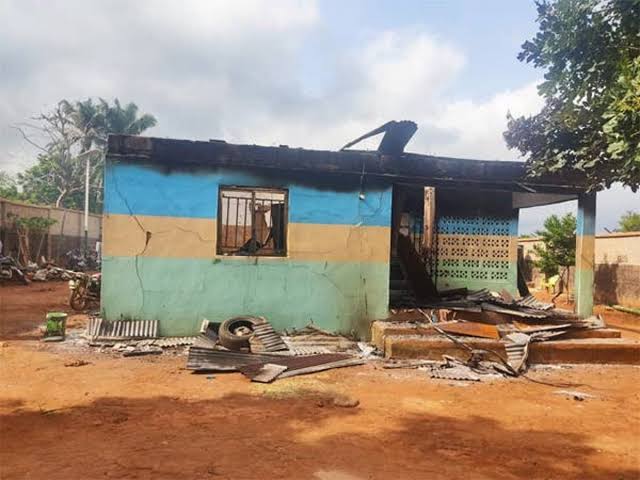 In Enugu today, there was tension as unknown gunmen attacked a Police station in Iwollo Oghe, Ezeagu local government area of the state.

It was gathered that the unknown gunmen who invaded the station at early hour of today, 25th May, 2021 killed four policemen and burnt down the station.

One of the villagers who begged for anonymity, disclosed that the attack turned bloody as four policemen were killed by the hoodlums who stormed the station in a Siena car and a bus.

“The men shot sporadically and we couldn’t even sleep, as the gunshot persisted, we started seeing heavy smoke. The attackers were there for more than 45 minutes.

“When we got to the station this morning, I could count up to four dead bodies on the floor and the entire station has been razed down. Their vehicles and motorcycles were destroyed”, A villager revealed.

The Enugu police Command Public Relations Officer, ASP Daniel Ndukwe confirming the attack, disclosed that Commissioner of Police, CP Mohammed Ndatsu Aliyu, who visited the scene for on the spot assessment have ordered for intense discreet investigation to fish out the assailants and their collaborators.