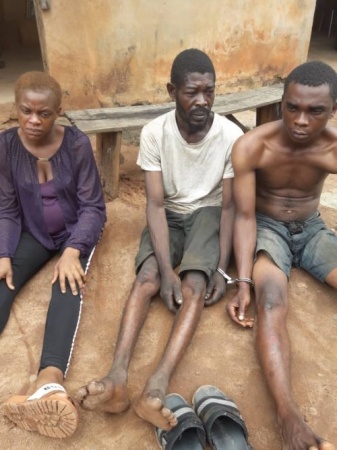 A pregnant woman have been arrested together with two men in Benin, Edo State, for alleged armed robbery.

The report gathered said that the gang’s mode of operation involved the woman faking labour pains along busy roads, while her accomplices would pounce on any would-be helper and rob them.

The operation that led to their arrest was said to have taken place on the Murtala Mohammed Way, where they robbed the owner of a Toyota car, who attempted to help the pregnant woman.

Her accomplices were said to have come out from their hiding place and forced the motorist to drive to the Upper Sokponba Road, where they dispossessed him of the car.

The suspects were set to dismantle the car and sell of its parts when the police from the Ugbekun Division swooped on them and arrested them.

The state Police Public Relations Officer, Chidi Nwabuzor, who confirmed the incident, said, “So many cars have been snatched by the syndicate in the same manner.”

Akanbieme said her partner, who is currently being hunted by the police, lured her into the crime.