The former Chairman of the defunct Pension Reform Task Team, Abulrasheed Maina joins the league of collapsing tried Nigerians as today ‘Thursday’, before the trial Judge Okon Abang of the Federal High Court in Abuja.

Maina is facing money laundering charges. He slumped after the court resumed proceedings in the 12-count charge the Economic and Financial Crimes Commission (EFCC) submitted against him and his firm, Common Input Property and Investment Limited.

Maina had on Wednesday secured the permission of the court to enter a no-case-submission after the EFCC closed its case charge against him with nine witnesses.

However, when the case was called on Thursday, Maina’s lawyer, Mr. Anayo Adibe, told the court that his client would not be able to proceed with his application.

Adibe said he was unable to prepare the no-case-submission owing to the fact that he was not availed with records of proceedings of the court in the matter.

While making a further submission, his client, Maina, slumped beside the dock where the court permitted him to sit. 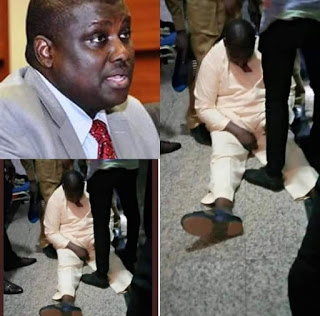 Some lawyers and officials of the Nigerian Correctional Service quickly rushed to his aid, a development that forced trial Justice Abang to suspend sitting.

Recall that EFCC had alleged that Maina used a bank account that was operated by his firm and laundered funds to the tune of about N2billion, part of which he used to acquire landed properties in Abuja.