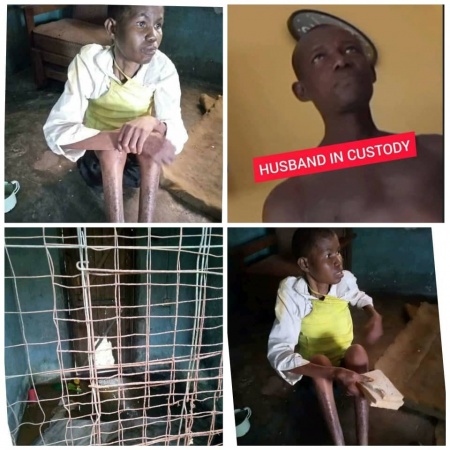 A 41 year old man identified as Ame Edjeketa has been arrested for locking his wife in a makeshift cage for four years in their residence at Orerokpe community, Okpe Local Government Area of Delta State.

It was revealed by Daily Independent  that the middle-aged woman identified as Gladys was accused of witchcraft and subsequenty caged in her home has been discovered in her residence in the community.

It was gathered that the victim regained freedom on 17, November 2020, after the intervention of a civil society known as Behind Bars Initiative.

Our source, Convener of Behind Bars Initiative, Activist Harrison Gwamishuu revealed that the victim who hails from Ozoro married her husband, Ame Edjeketa, an indigene of Orerokpe.

He revealed that the suspect and his family members accused the victim of being a witch after which they locked her up in a makeshift cage in their residence since 2016.

According to Harrison, ” Despite accusing the woman of being a witch, the husband on several occasions made way into the cage where she was left to die to have sex with her.

” She had three of their children while she was in the cage”.

Due to the bad state of victim, it was gathered that she has been taken to General hospital in Orerokpe for treament.

” The story is true. What happened we questioned the man, he said his wife is not mentally challenged. He told the Police that he had earlier taken her to her family members who rejected her after which he decided to take care of her.

” We have arrested him and he is currently in police custody” she stated. (Daily Independent)