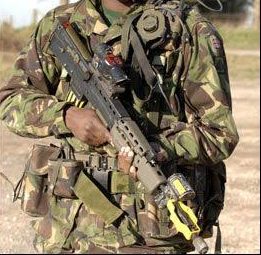 *NO HIDING PLACE FOR CRIMINALS: AS NIGERIAN ARMY TROOPS CONTINUE TO RAID THE HIDEOUTS OF INSURGENTS, BANDITS, KIDNAPPERS AND OTHER CRIMINAL ELEMENTS NATIONWIDE*

Troops of the Nigerian Army continue to raid the hideouts of criminal insurgents, bandits, kidnappers and other criminal elements nationwide with remarkable successes. One of such operations involved troops of 342 Artillery Regiment. The troops, while acting on credible intelligence raided a suspected kidnappers’ den at Ihie Community in Ohaji/Egbema LGA of Imo State. Two suspects, Umah Kingsley and Miss Chukwu Happiness were arrested. Items recovered during the operation include 2 empty magazines and a locally fabricated gun. Similarly, following the alleged murder of one Alhaji Tanko of Janda Village in Jema’a LGA of Kaduna State by unknown assailants, troops of 1 Division Garrison deployed within the area swiftly moved into the suspected crime location and arrested 2 suspects, Danladi Bisallah and Manesa Danladi with a locally fabricated rifle and 12 rounds of 7.62mm Special ammunition. Also, in two separate night operations conducted by same troops at Gindin Dutse Village and Rijana Forest of Birnin Gwari and Kachia LGAs of Kaduna State respectively, 5 bandits terrorizing areas were neutralized while 3 locally-made guns were recovered from them. the troops also rescued a 12 years old boy, Rabe Abubakar, who was kidnapped on 21st October 2019 by some bandits at Ruwan Sanyi Village close to Liberia Forest in Kubau LGA of Kaduna State. In the course of rescueing Rabe Abubakar, one bandit was neutralised, one motorcycle belonging to the bandits was recovered while 3 other bandits were believed to have escaped with gunshot wounds.

The Chief of Army Staff (COAS), Lieutenant General Tukur Yusufu Buratai wishes to thank all well-meaning Nigerians for their continued support and goodwill towards the Officers and men of the Nigerian Army. All law abiding citizens are requested to go about their lawful businesses without fear of molestation and intimidation. .

You are kindly requested to disseminate above information to the general public for awareness. Thank you for your usual cooperation.