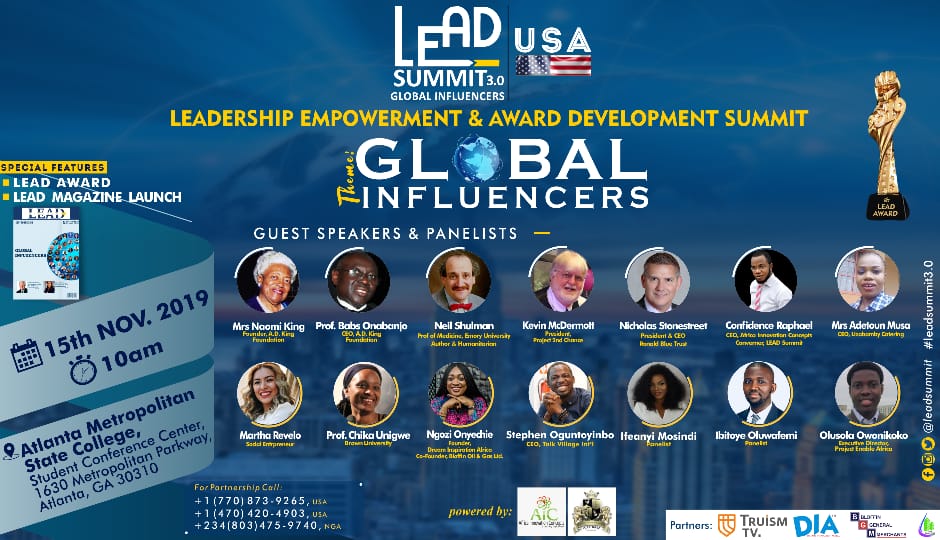 The prestigious Leadership Empowerment and Award Development Summit gain a global attention with the strong endorsement from the United State of America by the AD King Foundation Inc.
The organisers of the LEAD Summit, on Wednesday announced partnerships with the AD King Foundation Inc, U.S., to host the annual Youth Empowerment Summit in Atlanta, U.S.
The Chief Executive Officer (CEO) of Africa Innovation Concepts (AIC), convener LEAD Summit, Mr Confidence Raphael, said in Lagos that the deal was a ground breaking feat for youth engagement in Nigeria and Africa.
He said that the organisation would further pursue and champion its course across the world which involves leadership trainings to ensure that better leadership skills were inculcated in youths.
“We are pleased to announce the partnerships between Africa Innovation Concepts (AIC) and AD King Foundation Inc., U.S. to host the annual Leadership Empowerment and Award Development Summit — LEAD Summit in the U.S.
“We are in the forefront of pursuing good leadership skills for our youths and how we can have a safe and secure tomorrow of the youth through various empowerment programmes.
“This has been the noble course that we have been pursuing for some time in the past by organising seminars, lectures and other empowerment programmes which have benefited thousands of Nigerian youths.
“With the growing relentless pursuit, we are able to get role models and global influencers of our time to educate our youths on the paths to greatness away from social vices and crimes,” he said in a statement made available to the News Agency of Nigeria (NAN).
Confidence said that the 2019 LEAD Summit 3.0 with the theme, “Global Influencers” had to cross the shores of Africa because of the vision of the organisers to host the event across various places in the world.
“In order to champion this move of positive influential leadership campaign, especially across African countries. Due to the stigmatisation of leadership deficiency in most African countries, we have decided to pursue our agenda beyond borders.
“This is the third version of the LEAD Summit and it has been our vision to redefine and readdress the poor leadership practices that has eaten deep into the fabrics of our societies.
“This has led to the challenges every country is facing today. We are set to take this campaign in form of summit to various countries in the world.
“Therefore, we seek that many more should join in the vanguard of change the LEAD Summit has to offer because there is no other way than to make our tomorrow safe,” he said.
Confidence said that the LEAD Summit also goes with appreciating outstanding leaders from various workforce with the LEAD Award.
“We plan to make the LEAD Award a globally recognised and competitive. We truly appreciate the AD King Foundation for partnering with this vision.
“Indeed Mrs. Barber Naomi King is a true Heroin that women from all over the world should emulate her leadership drive, alongside the excellent works of Prof. Babs Onabanjo, these are examples of global leaders.
“Leadership Empowerment and Award Development Summit (LEAD) is designed to challenge the old and conventional paradigms, drive new thinking and change mindsets on leadership among the youth.
“LEAD Summit targets young populace of various nations ranging from those in higher institutions, young upwardly mobile professionals, entrepreneurs, business executives, captains of industries and more,” he said.
Confidence added: “The maiden edition featured industry leaders, political office holders, entrepreneur/business owners, professionals, emerging leaders, societal elite, ace entertainers, etc from across various spectrum of the economy and participants in their large number.
“To this end we are left without comparison, in recognising youths’ zest for a better nation and better leadership positioning for the emerging leaders.”
He disclosed that the goal was to inspire a new class of smart young leaders who would trigger and champion the change in the Nigerian leadership space with demography of over 70 million youths.
He said that the event would hold on Nov. 15, at 10 a.m. at the Atlanta Metropolitan State College, Student Conference Center, 1630 Metropolitan Parkway, Atlanta, GA 30310.
Confidence also disclosed that Speakers at the Summit includes, Mrs Naomi King, Founder, A.D King Foundation,
Prof. Babs Onabanjo, Chief Executive Officer/President, A.D King Foundation, Mr Neil Shulman, Prof. of Medicine, Emory University, U.S., and Mr Kevin MC Dermont, President, Project 2nd Chance, U.S, Mrs. Ngozi Onyechie, Founder, Dreams Inspiration Africa, Prof. Chika Unigwe
Others are Stephen Oguntoyinbo, CEO, Talk Village Int’l, Mr Olusola Owonikoko, Executive Director, Project Enable Africa, and Ms Martha Revelo, President, Ronald Blue Trust, U.S. among others.
Related Topics: