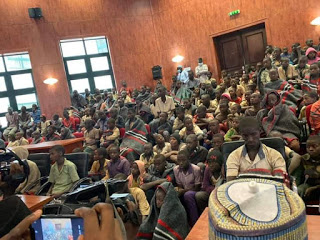 This happens about an hour after the Personal Assistant on New Media to the President, Bashir Ahmad, made the announcement in a tweet.

Buhari who received the boys in company of the Katsina State Governor, Aminu Masari, and some top Federal and state government officials, addressed them in Hausa language.

President Buhari thanked all those involved in the release of the students, especially the Federal and State governments, as well as the military.

In his response, Governor Masari enumerated the efforts made which led to the release of the schoolboys, saying security should be the responsibility of all and not just of the government.

President Buhari met with the boys a day after they were released by their captors who abducted them from the Government Science Secondary School in Kankara.

It was reported that hundreds of the students had been released, and kept safe in Tsafe, a local government area in Zamfara State before they were brought back to Katsina State.

The total number of students brought back to Katsina was 344, Governor Masari confirmed.

The terrorist group Boko Haram, that  has been carrying out a series of attacks in the North East, had claimed responsibility for the abduction.

But the President’s aide insisted that the Boko Haram has no connection with the abduction of the schoolboys.