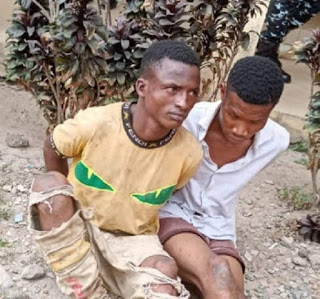 Two kidnapped Siblings, Samson and Thompson have died in the custody of their alleged kidnappers, while awaiting the  N25 million ransom demanded from the parents.

The suspects, Isa Memudu, 30, and Yusuf Muideen, 21, who were paraded by Osun state police command headquarters, confessed to kidnapping the children on a football field at Iludun community in Osogbo.

The children were Muyideen, a 200-level Public Administration student elder brother’s kids. He claimed to have been  lured into kidnapping them by his herdsman friend, who he had known since childhood.

“I know Isa in my neighbourhood. I am from Iragbiji, Osun State. I am an undergraduate I am in 200-level. I am studying public admin. The herdsman talked me into kidnapping.

We have been friends since birth in Iludun/Kelebe. We stopped a commercial motorcyclists to abduct the children. The bike dropped us before we went into hiding. They are my elder brother’s children. I am not living with my brother. We don’t know that the children will die”, he said.

Meanwhile, Isa, who claimed to be an apprentice at a mechanic workshop and also an herdsman, said the children were kept at bush he knew while rearing cattle, adding that he knew the children from the neighborhood prior to kidnapping them.

He added that his accomplice, Muyideen, knew the parents mobile number and contacted them to demand for the ransom after they were kidnapped.

“I was arrested for the offence of kidnapping. I abducted two children, one is Samson. I know them in my neighbourhood. I know them through Muyideen. We demanded N25million from the parents after abducting them on the football field in the evening.

“We used a motorcycle to kidnap them and took them to a bush that I know while rearing cows.

We contacted the father through his mobile phone number, which my partner, Muyideen already knows.

“The children died from the effect of the rope we used to tie them before the date the parents promise to bring money, so we had to leave their bodies there and leave.

They claimed that while they were alive for four days, they feed them bread and drinks. And after their death, they stopped contacting their parents since the objects for the ransom is no longer available.