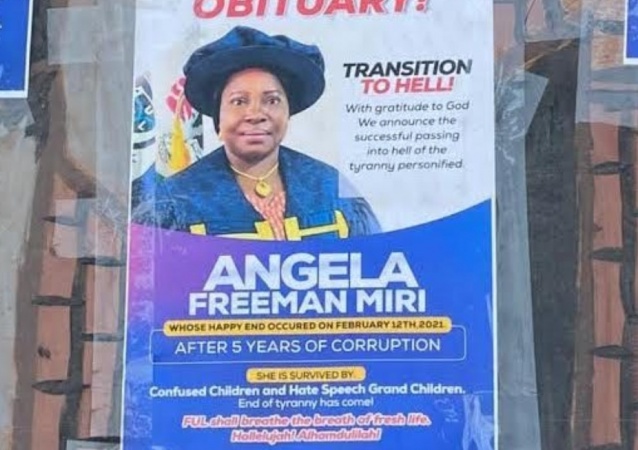 It was jubilation galore for staffs and students of the Federal University Lokoja on Saturday as Professor Angela Freeman Miri bows out of office after completing her five-year term as the Vice-Chancellor of the university.

The obituary pictures of the over 59-year-old Vice-Chancellor was pasted in the front of her office and strategic areas of the campus to mock the woman who was described ‘as full of pride high handedness.’

‘With gratitude to God, we announce the successful passing into hell of the tyranny personified.
ANGELA FREEMAN MIRI whose happy end occurred on February 12th 2021 after 5 years of corruption.

‘She is survived by: Confused children and hate speech grandchildren.

‘End of tyranny has come

‘FUL shall breathe the breath of fresh life.

The VC had been having a running battle with the institution’s chapter of Academic Staff Union of Universities (ASUU) which culminated in the splinting of the union into two.

The outgoing VC was accused of awarding most of the institution’s contracts to herself using her husband and children and engaging in some unwholesome practices which have negatively affected the university.

She was also accused of favouritism especially during the recent recruitment exercise where she was said to have given a larger percentage of those employed to her kit and kins from plateau State where she hailed.

At the send forth party organised for her at the school auditorium on Saturday, some staff and students were said to have booed the woman who was said to have hurriedly left the scene.

When contacted on her cell phone for her reaction, Prof Miri neither picked her calls nor responded to the text message sent to her.

The institution public relations officer Mr Benjamin Ojo did not also respond to  several calls made to him.