Today November 25th, 2020, Is International Day For The Elimination Of Violence Against Women By United Nations General Assembly.

This year’s Theme is “Orange The World, Fund, Respond, Prevent, Collect,” Is going to be marked for ’16 days’ of Activism that will end on December 10th, 2020, which is the “International Human Rights Day”. 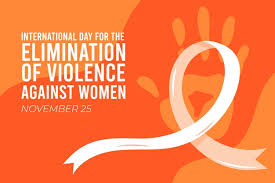 Reason for the day is to raise awareness that women all over the world are subject to rape,domestic violence and all sorts of violence.
It is also generally believed that the true nature and scale of violence are hidden.

This date is also a reminder of the assassination of the “Three Mirabel Sisters” who were political activists in the Dominican Republic. Their killings were ordered by a dictator of that country called Raphael Trujillo (1930-1961).
The feminist activist marked their killing on November 25th.

It have been observed that violence manifests itself in various forms, for example,
Physical, Sexual, Psychological forms etc.

There is Intimate Partner violence that is ( battering, psychological abuse, marital rape etc)

Violence Against Women And Girls (VAWG) is widespread and very persistent human rights violations in the world of today and most are unreported due to impunity, silence by victims and authorities coupled with Shame and the Stigma attached to it in the society.